In her final report as inspector general of the Canadian Security Intelligence Service, Eva Plunkett says CSIS's reputation and effectiveness may suffer if the problems aren't addressed.

The "re-occurring and high rate of non-compliance with policy and the ever-increasing rate of errors in reporting identified in what is a relatively small review sample of CSIS activities is a concern to me and should be a serious concern of the Service," Plunkett says in the annual report card.

"Errors in intelligence reporting, as I have repeatedly stated over my tenure, are a serious matter and have the potential for far-reaching consequences."

The Canadian Press obtained a declassified version of Plunkett's top secret November 2011 evaluation Friday under the Access to Information Act.

Plunkett retired last December and the Conservative government recently scrapped her office, saying it would save money and eliminate duplication.

As inspector general, she served as the public safety minister's eyes and ears on the intelligence service for eight years. She had a staff of eight and a budget of about $1 million.

In her report, Plunkett says her office performs the unique role of identifying issues and recommending corrective actions before they become public controversies that undermine trust.

"This is not work done elsewhere in government on your behalf," says the report.

"At this time, it is the only independent, impartial resource available to the minister to support his responsibility and accountability for an organization which works in secret but has been given highly intrusive powers."


Source: Agence France Presse URL: [link] Date: April 25, 2012 OTTAWA — A Canadian appeals court on Wednesday ordered a new hearing for a former Ottawa pizza delivery man declared to be a security threat with links to Al-Qaeda, effectively delaying his deportation to Algeria. The Federal Court of Appeal ruled that telephone intercepts be excluded from evidence in the case of Mohamed Harkat, a 44-year-old Algerian first detained in 2002 on suspicion of links to the global terror network. Harkat spent nearly four years in jail under a rarely-used national security measure, and has since 2006 been subject to strict bail conditions. A lower court ruled in 2010 that Harkat was likely an Al-Qaeda sleeper agent who remained a national security threat, while Canada's immigration minister vowed to deport him. But in Wednesday's ruling, the appeals court agreed with the argument made by defense lawyers that the Canadian spy agency's routine destruction of the original tapes amounted to a breach of process. The case now goes back to the Federal Court to reconsider. Defense lawyer Matthew Webber said the exclusion of transcripts of the intercepts would have a "profound effect" on the case. "Of the public material that we saw, it's the pivotal evidence," echoed fellow legal counsel Norman Boxall at a press conference, describing the transcripts as "tattered remnants" filled with inaccuracies. Harkat has denied terror links, and claimed he fled Algeria over a crackdown on a political party to which he belonged, the now-defunct and banned Islamic Salvation Front (FIS). He testified that he came to Canada as a refugee in 1995 after spending five years in Pakistan as an aid worker. "This gives me hope to clear my name and live another day... and hope justice will prevail someday," Harkat said Wednesday. "It's not over, but... I see the light at the end of the tunnel." In its decision, the Federal Court of Appeal also upheld disputed provisions of Canada's immigration law that allow secret court hearings and indefinite jailing of foreigners suspected of terror ties, without charge. Copyright © 2012 AFP. All rights reserved. ©2012 Google.


Photos From Our Recent Press Conference

Mohamed Harkat smiles at a press conference in Ottawa, April 25, 2012. Photo by Julie Oliver for The Ottawa Citizen. All rights reserved.

See more of Julie Oliver's photos of the press conference.

Minor victory for Harkat in fight against deportation

OTTAWA - Suspected terrorist Mohamed Harkat made significant headway in his fight against deportation on Wednesday.

The Federal Court of Appeal overturned electronic phone record evidence that Harkat’s lawyer said was pivotal in the case against him.

The records were recorded by CSIS and were said to pin terrorist ties to Harkat, but they’ve since been destroyed.

A three-panel judge said the records could no longer be used against him because he must be able to know what evidence is arrayed against him.

“My first response, my eyes started tearing down and my heart started pounding hard and I was shocked,” Hakart said.

But on Wednesday the Court of Appeal upheld the use of “special advocates,” who represent Harkat and are shown secret evidence denied to Harkat’s lawyers.

[PHOTO: Mohamed Harkat, centre, with lawyers Matt Webber, left, and Norm Boxall, holds a press conference Wednesday in Ottawa after the Federal Court of Appeal said he deserves a new hearing to determine if he’s a threat to national security.]

OTTAWA — Mohamed Harkat has been sleeping poorly of late. The Ottawa man knew the Federal Court of Appeal was about to make a decision that could have life or death consequences for him.

Depending on how the court ruled, Harkat — who was arrested in 2002 on a security certificate and has been in prison or under house arrest ever since — was facing deportation to his native Algeria, where he feared he would be tortured or killed.

That threat receded Wednesday — perhaps for good — after the appeal court ruled that Harkat, 43, deserves a new hearing to determine if he’s a threat to national security.

“It’s not over, but at least one day I’m going to see the light at the end of the tunnel,” said a visibly relieved Harkat, who couldn’t seem to stop smiling.

“It gives me another day to breathe on this earth. It’s just a matter of time to clear my name and declare I’m innocent.”

The appeal court found Harkat’s right to a fair hearing was compromised by the Canadian Security Intelligence Service (CSIS), which destroyed recordings of taped conversations from the mid-1990s.


[PHOTO: Mohamed Harkat takes part in a press conference in Ottawa on Wednesday, April 25, 2012. Harkat, a suspected terrorist that the federal government wants to deport, has won a partial victory before the Federal Court of Appeal. ]

OTTAWA – A man the federal government wants to deport over alleged ties to al-Qaida has won a partial victory at the Federal Court of Appeal.

In a complex ruling Wednesday, the court upheld the constitutionality of Canada’s security certificate process in the case of Mohamed Harkat. But it also found that some evidence against him must be excluded from a new court hearing.

The former Ottawa pizza-delivery man faces removal from Canada under a certificate that declares him a security threat because of alleged terrorist links. He denies any terror connection.

Harkat and his lawyers greeted the ruling as good news because it gives him another chance to clear his name at a new Federal Court hearing at a later date.

He lives under house arrest with his wife, Sophie, under a strict set of conditions that includes wearing an electronic tracking bracelet on his ankle, weekly reporting to authorities and a ban on leaving town without permission.

The court ruled that the use of so-called special advocates — lawyers appointed as watchdogs for the accused during closed-door hearings — is constitutional.

But it also said that because the originals of certain conversations were destroyed by Canada’s spy agency, any remnants of that material must be excluded from a re-hearing of Harkat’s bid to quash the security certificate against him. 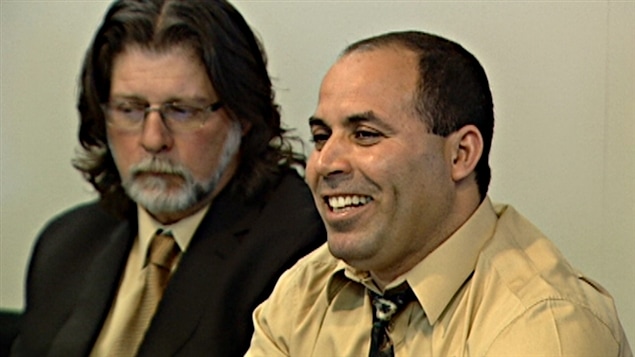 
Source: CBC News URL: [link] Date: April 25, 2012 Mohamed Harkat is no closer to deportation today after the Federal Court of Appeal in Ottawa ordered his case back to a federal court judge, saying some of his rights had been violated. Harkat, a former Ottawa pizza delivery man, was arrested in 2002 and is facing removal from Canada under a certificate that declares him a security threat due to alleged terrorist links. Mohamed Harkat has been in and out of court fighting a deportation order since his arrest in 2002. A judge who scrutinized the certificate said Harkat maintained ties to Osama bin Laden's terror network, including Ahmed Said Khadr — the late father of Toronto's Omar Khadr, who has spent years in a U.S. prison at Guantanamo Bay, Cuba. Harkat, 43, has repeatedly denied any involvement with political extremism. His lawyers argued to the Federal Court of Appeal that the security certificate system was unconstitutional, and said Harkat's rights were violated during the process because he was denied access to the evidence against him. The three-judge panel found Harkat's rights were violated because he was denied access to electronic recordings that have since been destroyed. The summaries of that evidence can now no longer be used against Harkat and requires the case to be reheard by the judge, said Court of Appeal Judge Gilles Létourneau in a written decision. The panel also found that the judge erred in finding CSIS informers fall into a privileged class who are granted conditions of anonymity. Security certificates constitutional

But the court did rule the current security certificate system is constitutional. The original security certificate system was thrown out by the Supreme Court five years ago, but revamped to include so-called special advocates — lawyers who serve as watchdogs and test the evidence on behalf of the defendant, but who are limited in their ability to pursue evidence beyond what they are presented. Wednesday's ruling is likely to be appealed. Harkat claims he's a refugee from Algeria and that he would be tortured if he's sent back. He lives at home with his wife, Sophie, but continues to wear an electronic tracking bracelet on his ankle, must check in with authorities weekly and cannot leave town without permission. Copyright © CBC 2012


Source: CTV News URL: Date: April 25, 2012 [PHOTO: Mohamed Harkat is shown as he leaves Canada Border Services Agency after receiving his deportation papers in Ottawa Friday Jan. 21, 2011.] Both the federal government and suspected terrorist Mohamed Harkat can claim partial victories, after the Federal Court of Appeal issued a complex ruling Wednesday on the process that placed Harkat under a security certificate. In its ruling, the court upheld the constitutionality of the government's security certificate process. However, it referred Harkat's case for a new hearing because the Ottawa man was not privy to the full contents of recorded evidence used against him. Those recordings have since been destroyed in keeping with policy of the Canadian Security Intelligence Service. The court said only the recorded conversations that Harkat was privy to may be used as evidence. The court also ruled that it was wrong for Harkat's trial judge to create a special "class privilege" for CSIS informers that guaranteed them rights to confidentiality and anonymity similar to police informants. The Ottawa gas station attendant and pizza delivery man was arrested in December 2002 on accusations that he had affiliation with al Qaeda, allegations he denies. His lawyers have also been fighting a deportation order to Harkat's native Algeria. © 2012 CTV All rights reserved.


A contentious terrorism provision creating the use of “special advocates” who are privy to secret government evidence is constitutional, the Federal Court of Appeal ruled today.

But the federal government’s victory triumph was tempered by a finding that the rights of suspected terrorist Mohamed Harkat were violated by the use of electronic recordings that have since been destroyed.

Any such evidence can only be used against Mr. Harkat if he was privy to the contents, the court said. It sent the case back to a trial judge for reconsideration based only on the portions that are properly admissible.

In another important victory for those targeted under the security certificate process, the three-judge panel found that Mr. Harkat’s trial judge was wrong to create a special “class privilege” for informers in these cases.